Bending The Future: 50 Ideas for the Next 50 Years of Historic Preservation in the United States, edited by Max Page and Marla I. Miller, published 2016 by UMASS Press. Includes an essay on Shockoe Bottom.
Posted by Our Rosewood at 10:35 PM 5 comments:

Hashtag to follow: #SaveDiversePlaces
Posted by Our Rosewood at 7:18 AM 2 comments:

On opening day, baseball debate still stuck on back burner 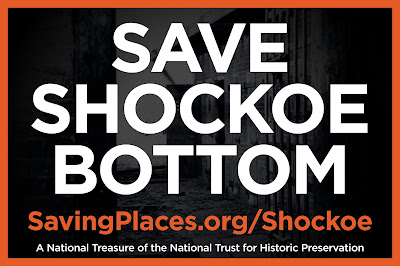 SPRING ISSUE OF THE VIRGINIA DEFENDER

READ ABOUT THE COMMUNITY CAMPAIGN TO DEVELOP AN ALTERNATIVE PROPOSAL FOR SHOCKOE BOTTOM!
Click here: https://drive.google.com/file/d/0BzmgRd68o3ZCTExrQTVhQjNPbnM/view
Posted by Our Rosewood at 7:01 PM 1 comment:

Public tax subsidy of Sports stadiums does not pay off...

Cities across the country continue to struggle with this same issue; and yet the research continues to affirm the same result, city after city. The following piece is about a proposal for Providence, Rhode Island.

"Research performed by economists has shown no consistent, positive impact on jobs, income or tax revenues arising from stadiums or sports franchises."
— Steven Frias on Tuesday, February 24th, 2015 in a newspaper commentary

http://www.politifact.com/rhode-island/statements/2015/mar/07/steven-frias/ri-gop-official-steven-frias-says-research-finds-n/
Posted by Our Rosewood at 12:26 PM 3 comments:

Statement by the
Defenders for Freedom, Justice & Equality﻿

Bowing to years of growing local, national and international pressure, Richmond City Council voted Nov. 10 to keep baseball on the Boulevard, where it has been played for nearly 60 years. This effectively kills – for now – the reactionary, developer-driven proposal to build a baseball stadium in historic Shockoe Bottom, once the center of the massive U.S. domestic slave trade.

This latest proposal to build a stadium in the Bottom – the fourth such proposal that we are aware of – was first raised Aug 5, 2012, in a Richmond Times-Dispatch opinion piece co-signed by Jack Berry, Executive Director of Venture Richmond, and Kim Scheeler, President and CEO of the Greater Richmond Chamber (of Commerce). These two wealthy white men represent the ruling 1 percent of the Richmond region, including the developers who stood to profit handsomely from the proposal.

Not once in their opinion piece did they mention slavery or the slave trade in which Shockoe Bottom played the central role.

An opposing opinion published two weeks later in the Times-Dispatch threw down the gauntlet, declaring, “There will be no baseball stadium in Shockoe Bottom.” That piece was co-signed by Defenders Ana Edwards and Phil Wilayto; Shawn Utsey, at the time the Chair of African American Studies at Virginia Commonwealth University; and then-Virginia State Conference NAACP Executive Director King Salim Khalfani.

It was one year ago today, on Nov. 11, 2013, that Richmond Mayor Dwight Jones unveiled the Revitalize RVA economic development plan that included as its anchor a Shockoe Bottom stadium.

From the first anti-stadium salvo in 2012, the opposition movement has grown to include hundreds of people – Black organizations such as the African Ancestral Chamber, All as One, Urban Awareness, Inc.; Nation of Gods & Earths; and the Richmond Branch NAACP. Important support came from Latino immigration rights activists and from progressive organizations like the Wayside Center for Popular Education; Collective X; Flying Brick Library; 13ainbridge Collective; Shockoe Resistance; Food Not Bombs; and many more.

Hundreds of people attended City Council meetings. More than three dozen academics and museum directors signed a statement opposing a Shockoe Bottom stadium. Close to 5,000 people have signed an anti-stadium petition. Descendants of “Twelve Years a Slave” author Solomon Northup traveled to Richmond to speak out against the stadium. Through vigil after vigil, rally after rally, protest after protest, the word spread and more and more people because involved.

The struggle reached a critical mass, resulting in global news coverage, including in The New York Times and Washington Post, the AP and Reuters news services, National Public Radio, CBB and media outlets Canada, Europe and Africa.
Earlier this year major preservationist groups took up the cause, including Preservation Virginia and the National Trust for Historic Preservation, encouraging Academy Award-winning actress Lupita Nyong'o, who played Patsey in the movie version of “Twelve Years a Slave,” to write Mayor Jones asking him to back off from the stadium proposal and instead involve the community in a genuine discussion about how to properly memorialize Shockoe Bottom.

Throughout this struggle, Venture Richmond and the Greater Richmond Chamber spent at least $50,000 in a slick pubic relations campaign to try and convince Richmonders – especially the city's  Black community – that a Shockoe Bottom stadium was in their interests. Mayor Jones spent more than a half-million in taxpayer dollars on “studies” for the same purpose – while the city's public schools continued to deteriorate to the point where a group of high school students marched on City Hall demanding “Money for Schools, Not for Stadiums!”

The fight came down to a long, drawn-out public relations battle for the hearts and minds of the public. It was truly David against Goliath – and David won.

The Defenders are proud of the role we have played in this fight. As an organization that for 12 years has been fighting for “Freedom, Justice & Equality,” we were in a unique position to explain the real issues from a position of credibility. Our newspaper, The Virginia Defender, and our weekly radio program Defenders LIVE, played central roles in educating, motivating and organizing the opposition. We hosted a series of activist meetings to make sure all voices were represented in devising strategy and tactics. We supported all opposition efforts – the Baseball on the Backs of Blacks initiative, the billboard campaign, protests at the Diamond stadium, the referendum effort and more.

But we always knew the fight would come down to one thing: was the community – especially the Black community – willing to come forward and fight to defend and preserve the sacred ground of Shockoe Bottom? The answer was a resounding YES!, and last night we all succeeded in stopping the stadium.

Victory is sweet, but now it's on to the second, even more important stage of this struggle: to reclaim and properly memorialize a section of Shockoe Bottom. Working with other community advocates and organizations and the National Trust, we are moving forward with this effort A broad set of guiding principles is being developed that will be raised and discussed at a series of community meetings around Richmond. Many voices – but  especially the voices of the descendant community – will have input. Should there be a museum? An interpretive center? A genealogy center? A performing arts space? A Sacred Ground Memorial Park? Statues? Signage? Tours? All this must be decided collectively, with the Black community having the primary voice – and the primary economic benefits of any development.

And then we will encourage the City do the right thing.

As we stated in the August edition of The Virginia Defender, we are giving the City of Richmond until April 3, 2015, to demonstrate that it is serious about creating a community-driven Shockoe Bottom memorial. That date will mark the 150th anniversary of the Liberation of Richmond and the ending of more than 100 years of slavery in the city. What a travesty – an international shame – it would be if by that date the now-majority-Black former Capitol of the Confederacy has still failed to rise to the challenge of facing the city's past and moving in a united way to a better, more honest future.

If there is no progress by April 3, the Defenders will announce plans to protest at the UCI Road World Championships, the international bicycle competition scheduled for September 2015 here in Richmond. Some 400,000 visitors are expected, along with reporters from more than 100 countries and millions of television viewers.

The Defenders have been very creative in the past in finding ways to focus media and public attention on local issues. Hopefully, April 3 will be a day of celebration – both of the end of slavery in Richmond and of a process for the city to finally come to terms with its terrible past, a past directly related to most of the social and economic challenges facing Richmond today.

We strongly encourage the City – its mayor, City Council and other officials– to do the right thing.

We know that we and our allies will do the same.

The statement is issued by the Defenders for Freedom, Justice & Equality, “an all-volunteer organization of Virginia residents working for the survival of our communities
through education and social justice projects.”

Find the latest issue of The Virginia Defender (Vol. 10 No. 3) at VirginiaDefenderNews.blogspot.com

Posted by DefendersFJE at 6:50 PM 2 comments:

"Why We Say No Stadium!"

Following are some of the organizations and individuals who have spoken out against building a baseball stadium in Shockoe Bottom. To access their statements, please click on their names.

Waite Rawls, Director of the Museum of the Confederacy

Sierra Club Fall of the James

CLICK HERE to sign the ONLINE PETITION OPPOSING A BASEBALL STADIUM IN SHOCKOE BOTTOM. Each time someone signs, a notice is sent to Richmond Mayor Dwight Jones and the nine members of Richmond City Council. As of April 7, we were up to 2,804 online signatures, plus 2,120 on hard copy petitions, for A TOTAL OF 4,924 NAMES. Please add yours now and SHARE THIS PETITION with your friends. For a hard copy you can take around yourself, contact the Defenders at 804-644-5834 or DefendersFJE@hotmail.com or download a copy from this site:
CLICK HERE to DOWNLOAD and PRINT the petition to collect signatures on your own. Return completed forms to Shakoor's Merchandise, 319 N. 2nd St., Richmond VA 23219.

CLICK HERE to go to the Facebook Event Page TELL THE MAYOR & CITY COUNCIL: NO to a SHOCKOE STADIUM, YES to a HISTORIC DISTRICT! to keep pressure up on the Mayor's office and City Council: https://www.facebook.com/events/182659445269602/

* Contact your City Council representatives and tell them you won't stand for a stadium in Shockoe Bottom. The pro-business group Venture Richmond has hired a public relations firm to try and build support on council. They have the money, but we have the numbers. Express yourself! For contact information, see:

* Bring your friends to the City Council meetings and district hearings. Bring signs - and speak out!

* Make a sign and put it in your car window and a front window in your house. Write a song. Draw a picture. Make council see the writing on the walls. Be creative. Be your own leader.

* Stadium opponents have been lobbying every member of City Council, and we do not believe the mayor has the seven out of nine votes necessary to pass the land-related ordinances necessary to put a stadium in the Bottom - but we won't know for sure till council votes. Until then, more pressure is needed.

The artwork on the home page is from a painting by Defender Ana Edwards titled "Portrait of Gabriel," the great slave rebellion leader who was executed on Oct. 10, 1800, at the Town Gallows in Shockoe Bottom. The City of Richmond incorporated the portrait into the historical marker placed at the community-reclaimed African Burial Ground.